In this interview, Guinea Bissau’s Prime Minister, Carlos Gomes Jr., admits that he would have preferred not to have seen the country’s presidential elections go to a run-off, but even so says he is confident in a win for the candidate supported by his party (PAIGC); Malan Bacai SanhÃ¡. Gomes, or Cadogo, as he is known in Guinea Bissau, speaks of the high abstention rate (40%) in the first round of the elections, and expresses his hopes that the next president “engages in dialogue and finally manages to bring peace and stability to the country.” 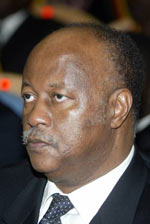 Mr. Prime Minister, all indications are that there will be a run-off in these presidential elections. Do you remain confident that the candidate supported by your party, Malan Bacai SanhÃ¡, will win these elections?

GOMES: A run-off wasn’t desirable, but in democracy we have to respect the rules of the game. We had hoped our candidate would win in the first round of voting, but as this was not possible, we have to prepare our party for the run-off.

Is there any preferred candidate for this run-off?

No, we have no preferred candidate. What we want is to support the PAIGC’s candidate so that he can win these elections with transparency. This is our desire.

What can we expect from this run-off?

A victory for the PAIGC…

And what can the victory of the PAIGC mean for Guinea Bissau?

It represents a light at the end of the tunnel so that we can effectively have a president who engages in dialogue, a president who can manage to balance and cohabit with the government and with all of the institutions of the Republic, and one who can finally bring peace and stability to the country.

An abstention rate on the order of 40% for Guinea Bissau is not normal.

A number of analysts are saying that this abstention rate is actually a vote of silence and a form of protest on the part of the Guinea Bissauan electorate, first of all because of the recent tragic events and secondly against the political class itself. What do you think about the abstention rate?

As you know, Guinea Bissau is a fragile country that depends above all on the international community. The international community from the beginning has made a point of having the Constitution respected. So we carried out various analyses and called attention to Guinea Bissau’s characteristics at the moment, as we are in the middle of the rainy season. Those who are familiar with Guinea Bissau know that right now most of the rural population is busy with farming activities. At the time we called attention to this, but the majority said no, that we should respect the Constitution… so we had no other argument than to respect that which our international partners, for the most part, were calling for. We had to accept his and go ahead with the elections, but everyone was aware that it wasn’t the appropriate time to hold elections.

The international community itself says that the rain could have had an influence on this level of abstention, but a reduced one. International observers point to a certain disenchantment on the part of the Guinea Bissauan people in relation to their politicians as the main cause of abstention.

You know that anywhere in the world the people have their own right to vote. It’s the only way they have to express their satisfaction or dissatisfaction with the policies with which the country is being managed, but in reality this is what’s truly hard. The fact is that cashew nuts have a strategic importance for our economy and right now all of the major operators and farmers are looking to assure their livelihood. And this is the farming season.

So you point to agriculture as the main cause for this abstention?

Yes. This is the only opportunity. It’s at this time of year that they can gather their harvests and guarantee their living. Indeed, we would like our population to participate actively, but unfortunately we have these contradictions…

Couldn’t the recent assassinations and the disenchantment of the population have played a role as well?

Everything is possible. There are many ways to read it. No one desires death no matter how many contradicitions you have with your adversaries, but all of this is possible.

For the run-offs, what work will you be doing to try to reduce this high abstention rate, a record in the country’s young democratic history?

The situation will remain the same, because if we do the math the run-off will take place before mid-July or August, which is the rainiest part of the year and when it will be hardest for traffic to circulate. But we have no other solution than to respect the commitments we have to the international community.

But won’t this abstention change the PAIGC’s strategy?

As you know, the PAIGC’s strength is its foundation in the population. Indeed, in these elections everyone could see how strong the PAIGC is. What we’re going to do is to keep working with our bases, we’re going to call together all of the regional officials for a meeting, and we might call a Political Bureau meeting to analyze the results and try to correct the trends so that we can win the elections without much trouble.

Your government was given a mandate at the ballot box in an election with a very low abstention rate, while the President of the Republic to be chosen will live with the shadow of abstention. Could this create problems of cohabitation?

We don’t think so, because all indications are that the electorate continues to have confidence in the PAIGC…

But a much smaller electorate in comparison with your election?

Yes. We won the parliamentary elections with 67 seats, but if we are to analyze how these elections are going and with the pressure that’s being put for the elections to be held, this is also reflected in the number of abstentions. But we think that what’s fundamental is that the two personalities (the President and the Prime Minister) be both members of the directorship of the one single party. Because this is the only way we can govern normally and have positive cohabitation.

Precisely, your relationship with Malan Bacai SanhÃ¡ within the party is not the most desirable one. SanhÃ¡ was your adversary in the run for the leadership of the PAIGC, and you supported the current interim president, Raimundo Pereira, as the party’s candidate in these early elections.

There’s always speculation about a lot of things, but there is no man alive who doesn’t make mistakes. What is fundamental is for us to know how to correct these mistakes and think about the development of our country. We are both members of the directorship of the party and this is what should count above everything else. It’s not the interest of Malan Bacai SanhÃ¡ or Carlos Gomes Jr., but the collective interest of the PAIGC. This is what we have to defend.

So what would be the ideal profile for the next President of the Republic?

He should have enough experience and have a curriculum vitae like the one Malan Bacai SanhÃ¡ has, a leader who has been president of the National People’s Assembly and President of the Republic.

Carlos Gomes Jr., prime minister of Guinea Bissau: “A run-off was not desirable”