Henrique Rosa, who was considered one of the favorites in Guinea Bissau’s presidential elections on Sunday, has acknowledged defeat in the race. 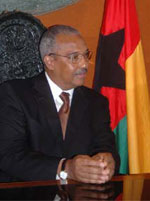 In a press release, Rosa told the people of Guinea Bissau that he acknowledged he would not be one of the two candidates in the presidential run-off election. He thanked all those who had supported him and expressed his willingness to continue working for democracy in his country.

Current projections give Malan Bacai SanhÃ¡ the lead in the elections with more than 40% of all votes cast, followed by Kumba IalÃ¡, with some 30% of votes. The first official results, however, will only be made known tomorrow at 10:00 am local time.