Isa Pereira is releasing her first CD, Kriola EnKantu, on April 24, with a concert at Jorge Barbosa National Auditorium in Praia. In this interview, Isa lets her artist’s heart speak about her first “child.” Friendship, dreams, hopes and complicity are the ingredients of this interview, which reveals the sensitive soul of a woman who lets herself be transported into the most intimate spaces of her being when the music begins playing. 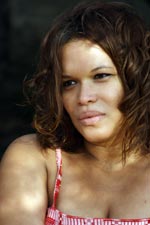 Your first CD, Kriola EnKantu, has finally been born. Looking at the CD’s repertoire, my curiosity was piqued by the song “Kantu Santa Luzia.” As far as I can remember, no one has ever dedicated a song to Santa Luzia, Cape Verde’s deserted island. What led you to do this?

I look at this first CD as a concept I have of Cape Verde. So I let myself be guided to a large degree by my instinct, by my inner voice and by my heart. So it was in near ecstasy that the title Kriola EnKantu. So I remembered Santa Luzia, I wanted to highlight it and I wrote the song with the intention of raising Cape Verdeans’ awareness about the urgent need to preserve and value this and other ecological reserves in Cape Verde.

And have you ever been to Santa Luzia?

I’ve seen pictures and watched television reports on Santa Luzia, but I’ve never been there. It’s the Santa Luzia I imagine in my mind.

What is the Cape Verde that you sing of on your debut album?

It’s a Cape Verde in which Cape Verdeanness is expressed through our racial and cultural mixing, which translates into our way of being and feeling, the fruit of various different influences and cultures from different countries. All of this is reflected in the musical genres, arrangements, lyricism and composers selected for this album. The result is a CD with 11 tracks with genres such as bandera, from the island of Fogo, a coladeira inspired by a trip I made to Salvador da Bahia [Brazil] and which pays homage to the joy and sensuality of the island of SÃ£o Vicente, a waltz representing the island of Santo AntÃ£o, a finanÃ§on-batuko for Santuago, a funanÃ¡-tabanka to praise the Cape Verdean diaspora, a traditional kola San Jon from the island of SÃ£o Nicolau, a mazurka reminiscent of the beauty of Boa Vista and a morna exalting the island of Brava.

So does your CD show that, contrary to what certain people say, Cape Verdean tradition remains firm and strongly rooted in its deep and diverse origins?

We never lose what is ours, it’s part of our blood. I was pleased by an interview with Manuel d’Novas I heard some time ago in which he said that we should be proud of our tradition, while incorporating into it the times, the rhythm of the world, other genres. When they prepare to record their first album, many singers prefer to sing other people’s lyrics, perhaps out of fear or reluctance to embark on a double adventure: being evaluated as singers and also as composers.

But you did the opposite. On your very first CD you recorded five sings with your own lyrics.

Yes, that’s true. I decided to face this challenge, and what’s more I had the audacity to give my lyrics to others to set to music. I don’t consider myself a composer. But one day, while I was talking to Princesito about my feelings and dreams, he challenged me, saying, “why don’t you put these things down on paper?”

I thought and reflected about Princesito’s question, and I decided to write about everything I had inside me. And I invited musicians who identify with each of the lyrics, islands and musical genres to compose the melodies – Princesito, Tcheka, AdÃ£o Brito, my brother Valdo Pereira. But I also had the privilege of being regaled with rich compositions by new and talented authors like Djoy Amado, Tiolino and Tibau. I also want to highlight Lay Lobo, a young poetess who gave me the song “Xintadu ta papia ku mar,” about the island of Sal, to sing. I sing this song with the intention of contributing and motivating Cape Verdean women to compose poems to exalt the islands and Cape Verdean females. The CD also has two traditional compositions that were created, in part, by the virtuoso Paulino Vieira.

Apart from a few exceptions, you surrounded yourself with young people like yourself to produce this album, is that right?

Yes, they’re young composers like myself, because I wanted to give them a chance to show their artistic work and show that there’s a lot of talent among the new generation of Cape Verdean musicians and artists. Indeed, Cape Verdean music is going through an excellent phase of grace, with young people very vigorously accepting their traditional vein, but also marking their day and age, mixing our musical base with a certain degree of contemporariness.

You spoke about the poetess Lay Lobo, but most Cape Verdean lyricists are men. Only recently have women begun to show their creations. In your opinion, why is this only happening now?

This isn’t a recent movement, contrary to popular belief. Cape Verdean women have been writing for a long time. What Cape Verdean women, who are strugglers, hard-working and courageous, lacked was the boldness to reveal their feelings. Lay Lobo and I are among those women who decided to accept this challenge.

In your case, what was the process of putting down what was in your soul on paper like? Was it hard? Painful?

It was neither hard nor painful because that’s what life is like: full of difficulties, struggles, disappointments. But the production of the CD was very hard work. After writing my lyrics and putting them to the music of other composers, in 2007 I handed everything over to HernÃ¢ni Almeida to make the arrangements. From the very beginning, he embraced the project with utter professionalism and dedication.

In 2008, we went into the studio for the recordings. And, finally, the photographic and graphic work by Abel Monteiro, who did an excellent job creating lovely ambiences, taking advantage of the landscape of the islet of Santa Maria in Praia and the beauty of SÃ£o Francisco convent in Cidade Velha. A few complicated situations arose throughout the process, but everything ended up coming out well.

Most of the people with whom you worked on this record are young like you, but there are a number of veterans like Voginha, Zeca Couto and AdÃ£o Brito. What was it like for a young woman like you among people with so many years of experience in the artistic world?

(laughs) I spent some very pleasant moments with these three great men. Voginha came to Praia to record just two songs (the album was recorded in Zunga Pinheiro’s Kapital Studios), but he ended up playing on six. He’s very spontaneous and easy to relate to, and it was a pleasure to delight in his guitar playing. Zeca Couto has known me since I was a child. One day while talking to my father, I told him I’d like to have an accordion on my record, and he suggested I talk to Zeca Couto, who plays accordion very well, as it was the first instrument he learned to play.

I invited him and he immediately accepted, and so I have the marvelous sonority of Zeca Couto’s accordion on my album. AdÃ£o Brito has long been a friend of mine and I’ve performed with him both in Cape Verde and abroad. So working with him was a joy. But I also want to highlight the marked yet subtle presence of young Angolan percussionist Carlos N’Du.

You already praised HernÃ¢ni Almeida’s talent as a guitarist and arranger. But how did the idea to invite him to arrange Kriola EnKantu come about?

Once I saw HernÃ¢ni playing at the Palace of Culture in Praia, accompanying Tcheka in a concert. I really liked the way he played and his posture on the stage, the way he related to his guitar and the sounds he managed to draw out of it. And I told myself that he would be the one to do the arrangements on my first CD. HernÃ¢ni was the emanation of my desire to produce an album in which the miscegenation of our Cape Verdeanness would blend with contemporariness.

You had your debut on the stages of Cape Verde about a decade ago, during the event Summer Stravaganza, when you returned from Brazil, where you studied public relations. But only now have you released your first CD. How do you feel having Kriola EnKantu in your hands?

(laughs) Oh! It was a mixture of feelings and sensations. There was that cold feeling in my belly, joy, a feeling of relief! It’s an indescribable moment. It’s very emotional when we begin to feel and see something that is valuable to us take shape, and we have are aware that inside this little box are feelings, vibrations, respirations and various different emotions.

People are already familiar with you on the stage. Are you at all concerned now with the reaction to the CD?

I have to open to everything. I’m going to present the CD in Praia first, on the 24th of this month, at the National Auditorium. I’m working on releasing it in SÃ£o Vicente and Sal and on all the islands, because my CD is about Cape Verde. Whether people like my CD or not, I want to feel all of the sensations it awakens in them. But it has to be constructive criticism, because I worked very hard to make this album happen. And I entitled it Kriola EnKantu to be able to express, through singing, my enchantment with my country and its history and success. So Kriola EnKantu is a song of love.

Isa, I’ve known you since we were students at Domingos Ramos high school.

Yes, since we used to buy juniper berries to eat in the classroom (laughs).

At the time did you already think you’d be a singer?

I never thought I’d be a singer. As you know, because you also went through this, it’s not easy to known what path to take in life. And in high school I was still unveiling my destiny. At the time all I was thinking about was earning a degree in public relations. Only after I came back from Brazil in 1998 and was invited by poet Filinto ElÃ­sio to perform at Summer Stravaganza did I discover and feel that this is what I wanted to do – be a singer. It was what was missing in my life.