Portuguese singer of Cape Verdean descent Lura is back with yet another new album, Eclipse. According to the artist, the title is not only a nod to the famous morna by legendary composer B. Leza, which she sings on the new CD, but is also a metaphor that translates the story of the album and, indeed, Lura’s own life. 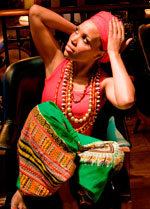 You have just released Eclipse, the fifth solo CD of your career, which shares its title with a well-known morna by B. Leza and which you include on the album. This is the first time you’ve recorded one of B. Leza’s compositions. Among all of this composer’s works, why “Eclipse”?

“Eclipse” is one of the classics of Cape Verdean music, and is also one of my parents’ favorite mornas. They always listened to this song as if it were one of their most beloved themes, and as the years went by it also became one of my favorite mornas. I recorded it because of this and also as a way of claiming the Windward Islands side of me. In my albums, I’ve recorded more batuko and funanÃ¡, because morna and coladeira are already more well-known internationally, but I’ve also got a Windward Islands side to me that I want to sing about. I gave the album the title Eclipse as a metaphor as well. The album is an encounter between my Leeward Islands and Windward Islands sides, between morna and funanÃ¡, between coladeira and tabanka…

In looking at this album’s repertoire, I see that you are still enthralled by Orlando Pantera, two of whose compositions you recorded this time. Tell me about these songs.

On this album, you play somewhat of a role of a “launcher” of new composers, such as in the case of Michel Montrond. How did you meet this young composer from the island of Fogo?

I went to Fogo because I want to get to know Cape Verde more and better. I’d already heard of Michel Montrond, who’s always there in SÃ£o Filipe playing in bars, just as a lot of other talented Cape Verdean musicians do. Michel showed me some of his compositions, including one he says he wrote especially for me to sing, but that’s not the one I recorded on this album. For Eclipse I chose the song “Terra’L,” which talks about the way city folk discriminate against those from the countryside, as if we weren’t all equal. I chose it because I don’t care if composers are very well-known or not. What I care about is their talent, as in the case of Michel Montrond.

You also recorded songs by Alfredo Gomes Monteiro and Edevaldo Figueiredo. Who are they?

Alfredo Gomes Monteiro is better known as FÃ©fÃ© di Calbicera. Actually, I think he’s going to be upset when he sees that he wasn’t cited as FÃ©fÃ© di Calbicera on the record. He’s a man very few people know about and who is very talented. He has great compositions like the one I chose for the CD, “Mascadjon.” Edevaldo Figueiredo, who is Angolan, is my bassist. We often compose together, I do the lyrics and the melody and he does the music. It’s been a good partnership.

You also recorded songs by MÃ¡rio LÃºcio Sousa, Toy Vieira, Valdemiro Ferreira (Vlu), Kino Cabral, RenÃ© Cabral and TeÃ³filo Chantre for this album. What captivated you in these compositions?

It’s important for me to identify with the compositions. When I sing a song from Cape Verde, there are certain themes that interest me, especially those that talk about situations and realities that aren’t a part of my daily experience, since I was born and have always lived in Portugal. And when I sing these compositions I kind of experience the personalities and situations of these composers from different generations, who are all very talented.

You are also one of the composers on this album, with the song “Maria.” Do feel more at ease to compose? Do you have more compositions you’re considering recording?

Composition is a moment of inspiration. I always write, but there are things I can record and others I can’t. You see, I’ve become more and more demanding of myself and, perhaps because of this, now I record fewer of my own compositions. What’s more, this desire to experience the stories in other people’s compositions doesn’t leave much space for my own.

What are the innovations this album brings in terms of musical genres and/or arrangements?

The arrangements are by Toy Vieira, which is a first. The two previous albums were arranged by Nano Andrade. In terms of genres, in addition to tabanka, which I’ve already mentioned, there’s a funk by Vlu, and a tango by TeÃ³filo Chantre, which closes the album.

What did you want to put on this album but didn’t manage to?

Nothing. Everything I wanted to put on this album is there.

In the first interview you granted me, even before you released In Love, you told me that when you were younger you didn’t like your voice. What is your relationship with your voice now? What is the voice we hear on Eclipse?

It wasn’t exactly that I didn’t like my voice. The problem is that even when I was a child a had a deep, raspy voice. I remember that when they would do roll-call at school and I would reply “present” or “me” everyone would turn around to look at me with surprise. And I never thought about being a singer, I wanted to be a dancer. I was also always shy in showing my voice. When they invited me to sing backup for the first time I was shocked. I accepted the invitation, and I was surprised by my own voice. As the years went be I learned to use it better, and I’ve even had singing and voice placement lessons.

After the astounding success of Di Korpu ku Alma and also M’bem di Fora, what are your expectations regarding Eclipse?

The best possible. I would just like to ask people, especially those who have accompanied my career, to listen to Eclipse with attention and love.