Cape Verdean singer Mayra Andrade will come to Cape Verde to present her second CD, StÃ³ria, StÃ³ria…, with five concerts between September 10 and 16. 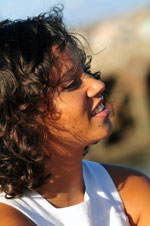 The first concert will take place on SÃ£o Vicente on September 10. On the 11th, Mayra will perform on Boa Vista, and on the 12th in Santa Maria, on the island of Sal.

The tour of Cape Verde will wrap up with two concerts on the island of Santiago. On September 15, the young artist will perform in Assomada, leaving the final concert for the capital city, Praia.

Mayra concerned about violence in Praia

In an interview published in French newspaper Le Monde’s June 25 edition, Mayra Andrade speaks of her connection to Cape Verde. “I go there regularly, my roots are there. I have no doubt I’m going to build a house there, and I’d rather be buried there than in PÃ¨re Lachaise,” she said.

The singer stresses, in the interview, that Cape Verde “is the essence of my rhythms, my spirit, my feelings. It flows through my music, even if I remain open to outside influences.”

But even so, Mayra does not forget the role that the sounds of Brazil played in her career. “I really did begin with Brazilian music,” she says. “It was only after I heard all of this that when I returned to Cape Verde at fifteen years of age I wanted to do something with Cape Verdean music.”

At this time, the 24-year-old artist recalls the support she received from the late Orlando Pantera. “He was an incredible person, with very special compositions. A friend. It was a great loss for me when he passed away.”

Mayra also acknowledges that in her country, especially in Praia, “everything has developed over the past several years – services, infrastructures, roads.”

“But,” she laments, “unfortunately there are also some negative aspects that have begun to gain dimension,” pointing to drugs and delinquency as two examples.

“There is a great deal of violence in Praia. Many of these people are actually Cape Verdean delinquents who used to live in the United States and were deported by American authorities. There aren’t very many of them, but as the country is so small, the problem seems enormous.”

Mayra Andrade to come to Cape Verde during tour in September