Fantcha is back on the scene with her CD Amor, Mar e MÃºsica after a nine-year hiatus. In this interview, the SÃ£o Vicente-born singer bares her soul, all of which she says she has put into this, her third album. She also reveals what led her to spend nearly a decade away from the stage. 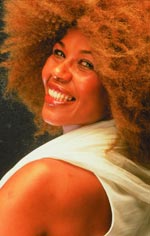 What is the album you have just given the public?

After nine years without recording, I’m pleased to say I’ve made a typically Cape Verdean album. The title of this CD is Amor, Mar e MÃºsica [Love, Sea and Music], an album that makes me feel very proud. I put 100% of myself into this album – I could say that I put my soul into this album. And I’m happy to have worked with great musicians from our country, who also put 100% of themselves in to the album. I have the great Bau as the CD’s musical producer, and HernÃ¢ni Almeida did an excellent job as well. And maestro Paulino Vieira was unbeatable, as always. I took a long time to make this record, because I wanted to do something of quality for my country.

Was this nine-year break intentional? Did it have to do with the idea of preparing a more mature album?

Yes. I had the chance to record before this, but for personal reasons I had to choose not to. But it was also for professional reasons, because I always wanted to work with these great musicians I’ve mentioned. When I say “work,” I mean “work together.” I had worked with them previously, with the exception of HernÃ¢ni. Paulino Vieira was the musical producer of my first album, Criolinha. I’d also worked with Bau, who did part of Criolinha. But I had them all together working with me for the first time.

What new or different things did they bring to your music?

Well, Amor, Mar e MÃºsica is a traditional oeuvre, but one with an exclusive flavor, I would say. As we all know, Bau is Cape Verde. HernÃ¢ni Almeida is a talented young man who has other ideas about what music is. In other words, even when he plays traditional music, we feel that there’s fusion there. And then we have Paulino Vieira, who gave another dimension to the album. It was marvelous to have three generations of Cape Verdean musicians, each one with his own seasoning, like when you make cachupa…

Yes, a rich cachupa, in which we put good ingredients and then sit down to eat with pleasure. I can’t make any predictions, but I hope that all of Cape Verde feels the same when people listen to this album. For my part, and for the musicians as well, I can guarantee that we gave the best of ourselves for this album.

In addition to your voice and your soul, as you said, what else did you put into this album? Did you make any contributions as far the arrangements are concerned? Did you write any of the lyrics or music?

For the first time, I did more than just sing on a record. The lyrics to one of the album’s songs are by me. I’ve been writing for quite some time, but until now I’ve never had the courage to show these compositions to the public. The title of this album is Amor, Mar e MÃºsica, which is also the name of a poem I wrote and which was set to music by TeÃ³filo Chantre. It’s a song that is very meaningful to me, because I wrote it in memory and in homage of my brother and my mother. In it I express what I feel for them, the pain of their loss. My brother was a great diver. We grew up together, he was a great friend, almost a father to me. When he died, I was devastated. My mother then died six months later, and I was torn apart. They may not be with me physically, but they’ll be in my heart forever.

Is this your only composition on the album?

Yes. I have other lyrics, but for this album I only contributed one. On future albums I intend to reveal other song’s I’ve written and reveal what goes on in my soul.

How is the release of Amor, Mar e MÃºsica going? Have you already shown it to Cape Verdeans in other parts of the world or to people in other countries?

This album was made in various different countries. I’m very happy about the fact that pre-production and the choosing of songs was done here on SÃ£o Vicente, where I feel my being most fully. There’s nothing like being in your own country, where you can breathe this pure air and enjoy our beautiful sea. Being here inspires me, I don’t find any of this anywhere else in the world. So because I dreamed up and planned the album here, I also wanted it to flower here first. Afterwards I’ll release it abroad and promote it internationally. In the United States, the album’s executive producer JÃºlio do RosÃ¡rio and I have a co-producer who’s been working in the area of World Music for 25 years, and will schedule the concerts and promotional events for the album there. We’re also making contacts with countries in Europe to schedule concerts.

Where exactly will the concerts for the album’s release be in Cape Verde?

The first will be at Jotamont Academy of Music in Mindelo, on Thursday the 4th. On Friday, I’ll be in Praia to give a show at the National Assembly. I’m happy they got in contact with JÃºlio do RosÃ¡rio and suggested this concert, because I feel that I’m going to give my contribution to the fight against cancer in my country. I don’t have a lot, but what I do have, my music, I give with all my heart. What’s more, I know that a percentage of the ticket sales will go to the organization, so that they can save the lives of more children, young people and adults afflicted with this disease. If as a patriotic Cape Verdean I can do something to save the lives of my compatriots, I won’t hesitate.

Fantcha, why do you come to Cape Verde so seldom, so much less often than other Cape Verdean artists who live abroad?

I was waiting to have an album to bring with me. As you probably know, when you make a record there’s a label that is responsible for promoting it and deciding where the artist should go. An artist can do the best work in the world, but if it’s not backed up by quality promotional work, people won’t have the opportunity to hear it. It’s good to know, like Carlos Lola said, I’m a born-and-bred SÃ£o Vicente girl, but I need to promote my album universally. That is, I’m happy for the opportunity to premier my album here, in my country, but afterwards I’m going to have to show it to the world. So on the 6th I’ll be back in SÃ£o Vicente for another promotional concert, this time at the MindelHotel. What I’m saying is that I didn’t come very often in previous years because the label I was working with didn’t make it possible for me to come to Cape Verde more.

How do you feel now that you’ve recorded a new album and are returning to the stage?

I feel good about myself, and I can say that it’s a new chapter. With Amor, Mar e MÃºsica, I’m outlining a new beginning for my artistic career. I’m now a person who’s more pacific, more mature and with a lot more to offer Cape Verde. And I can hardly wait to sing for my people.

Has having an artistic career always been your life project?

Yes. It’s what I’ve always wanted since I was a child. My mother had a beautiful voice, she was excellent. My late brother played guitar. My other brother was a soloist for two SÃ£o Vicente groups. I grew up in a musical atmosphere. My mother and I used to sing together, accompanied by my brothers, late into the moon-lit nights. I remember that when I was about eight years old, Bebeto from Voz de Cabo Verde was one of the first people to tell my mother, “Fantcha is going to be a singer.” I never thought about becoming a singer, but it was something that, unconsciously, was already a part of my life project. And so it happened. I met CesÃ¡ria Ãvora, with whom I began to sing in the evenings in Mindelo at the Piano Bar with Chico Serra, OfÃ©lia, North Country… Yes, I believe that singing is a talent God gave me.

Do you feel fulfilled, or do you think that in all these years you could have done more and better?

Well, I feel fulfilled with myself. But regarding my artistic career, I can say that there was an interruption. When I began working with Lusafrica I made two albums. But in 2004 I underwent a huge shock in my life, something that I would rather not discus at the moment, which caused me to stop over these past four years. I’m sure that I did the right thing in not recording during this period, because I wanted to make a record that when you sit down to listen to it, gives you an undeniable feeling of pleasure, because it’s a genuinely Cape Verde product, something genuinely ours. I thought a lot during the time I was on hold about where I wanted to get to as an artist. And now I’m finally here, forging the path that I decided to follow myself, working with musicians I chose and with a producer who made me feel at ease to do what I wanted. I met with Bau, we communicated and worked together on everything, I chose the photographer I wanted to photograph me for the album cover. Alongside the American co-producer and JÃºlio do RosÃ¡rio, I decided what the graphic design for the album would be… So it was a team effort, as it should be, not just one person making all the decisions.

After Cape Verde, where will you be releasing Amor, Mar e MÃºsica?

After Cape Verde, I’ll release the album in the United States, namely in New York, where I live. We’re doing everything we can to release it there by Autumn.